Henna tattoo, is it permitted according to Judaism?

While living in London, UK, I was invited to draw henna tattoos at an "Aish" woman's event. I was surprised. According to Judaism laws I was not sure whether this was allowed.

After checking it out thoroughly on line, I realized that there is no restricting law against temporary tattoos in Judaism. It is all up to what your Rabbi follows and how extreme your views are regarding this issue.

The woman's evening was a success and the queue to my henna was endless (apart from the ones close to Mikveh day).

Henna in the bible

Henna appears in the bible as it does in other ancient Semitic texts. We are also aware of the plant of which it is made of (Lawsonia Inermis) that used to grow in the Holly Land during the Hellenistic period. The most ancient records of Jewish henna rituals are from the Middle Ages.

Henna was used mainly for decor and also as a ritual worldwide, it became popular all over but mostly among Moroccan and North African Jewish communities. The most significant use of henna in Jewish communities is at the ceremony of the henna prior the wedding, these communities are mainly the Sephardi 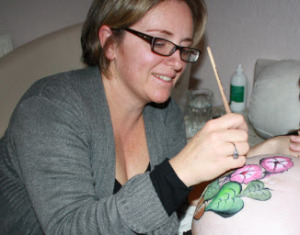